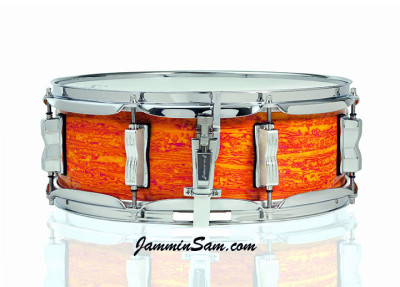 Scott writes:
Sam, I purchased a 5 x 14 Ludwig Classic Maple snare drum for my big ‘Bonham’ kit after I first restored it. It was a close match to the original maple shells; but, the sound just didn’t match the rest of the drums, which are monster tubs. So, I decided I would consign it to my local drum shop, where it languished for a long time. Just around the same time, Jammin’ Sam came out with their Citrus Mod wrap. I knew when I saw it I wanted to put it on a drum somehow. Well, I put two and two together, pulled the Classic Maple from consignment and had Ellis Drum Shop’s Rob DeMarais recover it. Awesome!  Then, I had this idea that all three colors should be represented, so what you see is the result of that idea–the Ludwig Psychedelic Trio!  Thanks Sam–you guys are the greatest!
P.S.  Matt Schmitt Photography took the pictures.