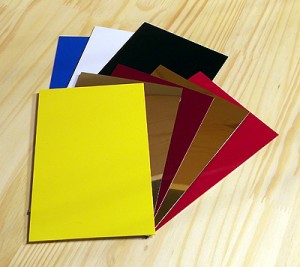 Black and White had been the two most popular drum wrap colors in the last half of the 20th century (especially black).  More new sets have been sold in that time period (with these two colors) than any other color.  We saw a surge of popularity of these two colors during the 1980’s, and even today, black is among the most popular colors we sell.  Black looks great on a set because it greatly contrasts the chrome hardware.  It has been the choice for a lot of people, for many years,  including several rock and heavy metal drummers.

White has been popular for many years with many, and has always been a favorite with churches (white symbolizing purity), marching bands (because it holds up very well to direct sunlight and shows little scratching) and custom airbrush painters [a nice color base for adding colors, and a gloss finish for certain paints to adhere].  For the price, one cannot get a better value than choosing either black or white (or our other solid colors).  This seems to have been a strong factor for their popularity.  However, in the 1990s, we saw a decrease in the sales of these colors.  But, somewhere around 2000, black came back strong, and since then being very popular.

Reds have been very popular in the past and saw their time of most popularity during the 80’s and early 90’s.  We have sold our Wine Red, which was first called “candy apple red”, since the late 1980’s.  This color also does a good job of contrasting the chrome hardware, and many who have bought it tell us that it looks better on the drums than they had imagined (contrasting the chrome beautifully, and, by contrast).  Our current Bright Red is a new color that really gives a brilliant splash of medium red.  We started selling blue in the 1980s.  It surged in popularity in the1980’s.  Today our new blue is called Tropical Blue and has a deeper, more vibrant look.

Crazy Yellow was sold by us in the 1980s which we called “yellow”.  This color was made popular in part by Tony Williams who chose it for his Gretsch drums (provided by the Gretsch drum company).  Many of those who have purchased yellow covering from us, have refered to it as “Tony Williams” yellow.  Because of some production problems, we dropped the color for most of the 1990’s.  However, in the late 1990s, those problems were resolved, and since them, we have made it available.

Chrome has been very popular during the time of the 70’s and into the 80s. It has come in both metal and plastic finishes. Metal chrome was first used, but, because of the added difficulties of working with metal, (different tools needed, added weight to the drum, etc.) and of the rising cost of stainless steel in the 1970’s, plastic chrome became the viable alternative.  Even though stainless steel had problems, it did not scratch easily and held up very well (except for “pin hole” dents and sharp object creases). Plastic chrome, though, came up the winner in the end, but it has its pros and cons too. On the down side, it scratches easily and shows scratches more than any other color.  On the up side, it is lighter in weight and has the same appearance as a bathroom mirror.  Our chrome covering is among the few that has an added clear top to the top of the chrome that keeps scratching down.  (This top is part of the actual finish, not the peel-off protective film). 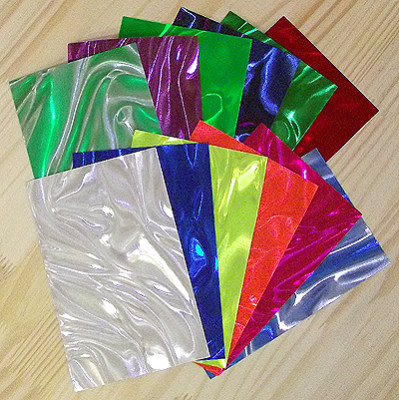 Satin Flames finishes came on the scene in the late 1960s.  The Ludwig drum company, in their 1969 catalog, offered the Satins (white, red, blue, gold and charcoal), calling them “Astros”.  However, the company decided to drop all of them by the printing of their 1971 catalog.  The Slingerland drum company offered five colors in their 1966 catalog (white, red, blue, gold, green), then later added tangerine and lavender in their 1969 catalog calling them “Satin Flame Pearl”.  However, Slingerland dropped all the Satin finishes sometime in the 1970s.  The Camco drum company made them available on their drums in the early 70s (red, blue, gold, purple, charcoal and aqua) calling them “Moire”, but dropped them by 1975.  In the Rogers drum company catalogs we have, no Satin Flames finishes were listed as being available (none listed in the 1967 or 1973 catalogs).  Gretsch offered them in 1966 (aqua, gold, silver,  and peacock) calling them “Flames”, but also later dropped these from their catalog before the next decade was out.

Note
The color “Peacock”, sold exclusively by the Gretsch drum company in the 1970s, was a color combination of red, bluish purple, and black.

Even today, to our knowledge, none of these finishes are offered by any of the major drum companies in their standard color list.  Even though, and even after more than 30 years, they have not been forgotten.  Today, they are very popular and purchased by many individuals for their drums.  They are considered inexpensive (costing less than pearls, sparkles, and glass glitters), and have the greatest visual effect of any wrap.  We purchase our Satin Flame finishes from the very same manufacturer that the above drum companies used in the 1960s and 70s.  Also, some of the Satin Flame finishes we sell have more scratch resistance properties than the finishes available in the past.  If you wanted to be noticed in any crowd, and have a piece of nostalgia to boot, then you too, may want to seriously consider one of our spectacular, 3-D looking, Satin Flame finishes.  Check out all 10 of our Satin Flame finishes on this site:

We recommend that if you chose a satin flame finish, that you have cases for the drums; the finish does scratch easily. However, if proper care is taken, the finish will look good for years to come.

This article continues with more about the History of Sparkle Drum Wrap.

If you have any questions, please feel free to contact us.  Click our other selections below (blue headings) to read about our “Guarantee/Warrantee” and other information. We welcome your interest in all our products on this site and hope that you will call us for a free catalog and samples of our drum material.  Thank you for spending the time to read this article.